In honor of Veterans Day, everyone at the Cross Country Chase would like to thank our veterans for their service and the freedoms afforded to us by their sacrifices. It also seems appropriate to honor one of America’s true treasures and a motorcycling icon that we were lucky enough to have met during Stage 6 of the Chase.

On September 11, the CCC ended the day at the very warm and welcoming Harley-Davidson of Macon, Georgia, where a gracious staff served an elegant dinner for the famished riders. Chase participants were delighted to meet their hosting family, including the founder, who started the family owned dealership back in the 40s. Earlier this year, locals had celebrated the dealership’s patriarch, Grover Sassaman, as they rang in his 98th birthday but you’d never have guessed the spry Southern gentleman was closing in on the century mark.

As a young man, Sassaman first attended Harley-Davidson® Factory School in 1939, establishing a life-long relationship with the Motor Company, before he was shipped out to serve his country as a Marine in the Pacific.

Grover worked as an aircraft mechanic in the Black Sheep Squadron during WWII and did some seriously creative crafting when he took two damaged F4U Corsairs and combined them into one plane, which earned him some serious respect from his commanding officers. Later, he was awarded a Purple Heart for a March 2, 1945 incident after a plane dropped an anti-personnel bomb designed to spray shrapnel. Some of that shrapnel, which he still carries in his body, found its way into Sassaman’s hip and leg but he continued his service until the war ended and he returned home. He immediately went back to Harley-Davidson. In 1947, Grover was signed by Arthur Davidson as a dealer in a one-man shop in Indiana. He then relocated to Florida before settling in Macon in 1957. The personable nonagenarian continues to work at the dealership to this day, arriving before employees each morning to attend to office chores and greeting friends and customers. And he still rides his 2010 Road King with a sidecar to the shop on occasion. 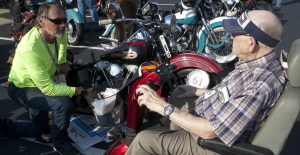 During the Cross Country Chase’s visit to his dealership in September, Sassaman was happy to share the particulars of how he came to be the world’s oldest active Harley dealer, reminiscing about his time with the Davidson family, learning to wrench and about working side-by-side with Arthur.  Quick and witty, Grover talks motorcycles with the best of them, sharing dates, details and tidbits that held the group in awe and respect.

Grover can walk, but cruised the property on his convenience scooter for a lap through the parking lot in the hot Georgia sun to check out the Chase bikes. He was particularly smitten with the 1939 HD EL owned by rider #61, Bob Zeolla, because he considered it to be one of the most original of the machines on the run; a clear indication that a keen eye for details compliments his sharp wit. Zeolla graciously offered up his bike for a portrait with Sassaman. Taken on site in a temporary studio set up in the dealership’s service area by famous biker photographer, Michael Lichter, Grover seemed delighted by it all. Needless to say, everyone was honored to meet this wonderful historian.

If you’re in Georgia, we invite you to take a trip by the Harley-Davidson of Macon dealership and meet Grover and the Sassaman family. Chances are good you’ll get the opportunity to shake this great Harley-riding, American veteran’s hand. 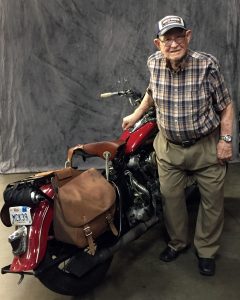