As if just riding The Cross Country Chase on cool old motorcycles wasn’t thrilling enough, there are several fun stops planned along the way, including a visit to the Harley-Davidson Museum, as earlier announced.  There’s also a fun little field trip that’s sure to transport riders back to a place of historic interest.

After the Grand Start and a beautiful ride through Michigan, riders will kick off Stage 2 by boarding an historic old ferry, the S.S. Badger. Launched in September of 1952 when the average annual wage was a whopping $3,850.00, a new house cost about $9,000.00, and the movie, “Singing in the Rain” had just come to the silver screen, the Badger is a throwback to a much simpler time. She is a  treasured National Historic Landmark that moves.

Originally outfitted with reinforced ice-breaking hulls, the ship was employed all year long to haul rail cars as well as passengers and vehicles between the states of Michigan and Wisconsin, the old workhorse has a less strenuous work schedule these days. The S.S. Badger still carries both vehicles and passengers across Lake Michigan, but the old gal is currently enjoying a seasonal job between May and October. She is the last remaining coal-fired steam engine still operating in the United States. The Cross Country Chase riders and their motorcycles will be among its commuters this September as they make their way along their epic 8-state, 10-day adventure. Covering about 60 miles, the ferry trip takes 4-hours and comes with it a certain amount of luxury.  With private staterooms, a galley, lounges, and even an on-board museum, the old ship is its own floating time machine. With a belly full of old motorcycles, the scene will be set for an exciting cruise through the decades. 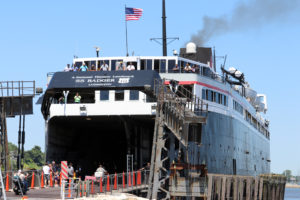