As mentioned in the last post, there are two key differences between the Cross Country Chase and other antique tours. The first was the unprecedented and vital attention to safety for the CCC riders and staff. The second is that promoters Jason and LeeAnn Sims know their participant pool and work hard to host an unparalleled sophistication by offering unique components to their antique motorcycle tours.

Trying to bring an all-encompassing experience to the inaugural Chase, it was a goal to highlight the route’s exciting elements for the riders. By requiring a first-ever daily quiz, the Sims hoped to round out the adventure along the course by expanding the focus beyond the daily struggle to keep the bikes running. Riders kept an eye out for undisclosed check points where they took a break to exercise their minds. There were landmarks and history and intriguing landscapes to appreciate and, through testing, promoters hoped to get riders to notice their surroundings and appreciate motorcycling on a different level. And it worked. Whether riders enjoyed the daily quiz or not, the desired effect was achieved: people were talking about what they saw, what they knew and what they missed on the test. Testing proved humbling since not one entrant answered 100% of the questions accurately. Even the most seasoned riders learned things about motorcycling history that they never knew and it brought to surface another dimension of biking. 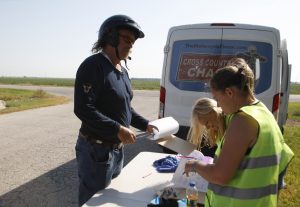 Participants discussed the tour on an intellectual level. They were studying, paying attention and noticing the route from a perspective of curiosity and competition. They noted elevations, bridge names and city populations, ever aware that those details could show up on the quiz. They asked each other questions on past quizzes, debated over wrong answers and shared in commiserating over the challenge of the tests. 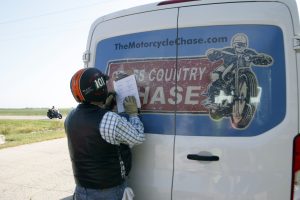 Additionally, in terms of overall scoring, the daily tallies were a sort of wildcard that added another level of excitement to the final scores. Just because someone held a particular ranking one day meant nothing by the time test scores were next tallied, since a poor testing quickly knocked a rider out of contention and allowed someone else to climb up the ladder just by knowing various trivia like the year Harley-Davidson first supplied motorcycles to a police department or the name of the river the pack had passed earlier in the day. The test expanded the mind and evened the playing field. Whether riders liked the test or not, it played a key and unprecedented role in the adventure of the Cross Country Chase.