It was a busy day for our adventurous CCC group. Riders started off the day by stowing all their weather gear and hitting the wind with the knowledge that today would be a balmy 90+degrees by the time they called it a wrap. Then, as the rest of the world started their workweek off by a commute to the office, Chase riders kicked their day off with a nice ride and a pop quiz in the middle of a cornfield, with several of the riders never even getting off their motorcycles to answer the 10-point test. The al fresco classroom experience was then followed closely by a pulse-quickening trip across a famous haunted bridge.

The old Wabash Cannonball Bridge, located on the Illinois and Indiana borders, was built as a railroad bridge back in 1897 and is believed by some to haunted by the spirits of the past. Chase riders, however, found it to be a rite of passage as they wrangled their antiques over the warped, off camber and riveted ancient planks. The tense but successful crossing certainly gave the group something to talk about as they gathered for the killer fried chicken and potato salad lunch hosted by the friendly folks at Bud’s Harley-Davidson in nearby Evansville, Indiana. 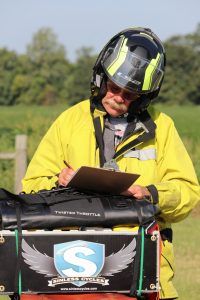 The long miles and the heat of the day spent crossing three states taxed both men, women and machines. By the time riders rolled into Harley-Davidson of Bowling Green, Kentucky, for a tasty dinner, one rider’s saddlebag had caught fire and another’s engine shot flames as he tried to kick start the tired machine. It was easily extinguished and Matt Miller, #46, rode his 1947 HD U off for a night’s rest.

You can catch the riders at Bumpus Harley-Davidson, Murfreesboro, Tennessee tomorrow at 11:00 or at Coker Tires in Chattanooga, Tennessee from 5:00 to 6:15. Meanwhile, check out today’s scores! 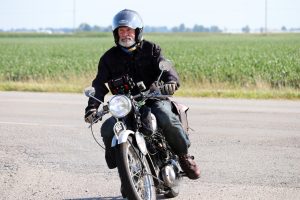