I was born and raised in Indianapolis and that makes me a race fan by default. Cars, Motorcycles, Airplanes it’s all good. I grew up in a rural area on the south side. My next door neighbor, childhood friend and co-conspirator were lucky enough to have large enough yards to torment the other neighbors with mini bikes, homemade go carts and generally anything that moved and made noise. Eventually we graduated to larger, faster, louder motorcycles, although I doubt anything was more irritating to the neighbors than Paul’s HD Leggero with no muffler. We did however learn a lot about machines keeping it running.

My first real road going bike was a 1973 Norton Commando. That purchase was probably equally influenced by  1) the 1972 Cycle World article claiming it to be the quickest in the quarter mile  2) The 1973 Norton “Wild Bunch” ad,  yeah the one with the great looking girls on and around an Orange Commando, and Thirdly the fact that a guy in our High school had a Blue Norton scrambler and dated the coolest, cutest blonde in our class. I figured if it worked for him… 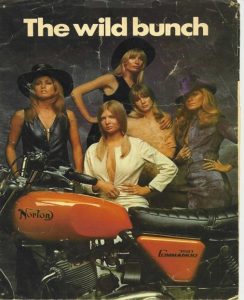 Forty five plus years later, after 4 years enlisted time in the Air Force, a four year stint at Purdue university for a degree in Engineering, another 16 years flying for the Air Force (T-37, T-38, C141)  I am still partial to old Brit bikes. The garage is overflowing with numerous projects including that original orange 73 Commando and a few that actually run. Fortunately one that actually runs qualifies for this year’s Cross Country Chase. It is a pretty nicely preserved 1957 AJS model 18, a 500 cc single.

After crewing for my lifelong friend, and co Cross Country Chaser Paul, for the 2018 Cannonball, I am eager to grab the handlebars and get going, just hope me bum is up to the task.